It had been a couple years since I spent several days in another city, hanging out with 20,000 psychiatrists and hobnobbing with attractive young Pharma reps. (I think of Private Joker’s protest in Full Metal Jacket, “I gotta get back in the shit... It’s been weeks since I heard a shot fired in anger!”)

This year’s APA conference in San Francisco celebrates the association’s 175th year. It opened Saturday evening with much self-congratulation and optimistic tone from outgoing President Altha J. Stewart, M.D., and smiles all around the stage from establishment psychiatric luminaries like Jeffrey Lieberman, Steven Sharfstein, Saul Levin and a dozen others. Attendance is in the tens of thousands. Perhaps a majority are Americans, but only just a bare majority. 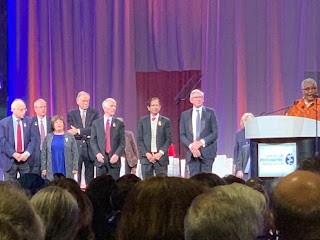 The headliner event in opening ceremonies was a “Fireside Chat With Valerie Jarrett.” Jarrett was President Barack Obama’s senior advisor. She’s a great, entertaining personality, but one suspects she knows very little about current issues in mental health. Her comments were pretty well limited to the standard tropes about stigma, parity, community organizing, and the brief glory of the Affordable Care Act. She promoted her new book, and the APA showed its members their influential friend. It was anticlimactic. 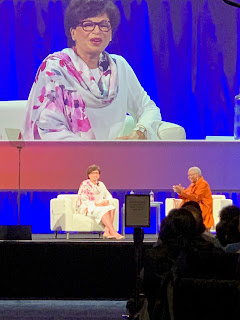 Saturday morning, Wendy Burn, President of the British Royal College of Psychiatrists, had tweeted out an invitation to a networking reception for the RCPsych Pan American Division scheduled for Sunday afternoon, apparently to anyone attending the APA Annual Meeting in San Fran. However when I responded that I would accept, she clarified that it was only for APA conference delegates. I told her I was a registered attendee at the conference, but she lamented that I had to be a British Psychiatrist (her capital P) or a member of the PanAmerican Division of the College. (Oops I’m no Brit, so I couldn’t go.) Wendy and I had some perfectly social back forth via Twitter Saturday, but it turned out I was registered for another course when she was giving her big speech, so I would not be able to hear or meet her. After she confirmed that her impression, like mine, was that this year’s conference was astoundingly international. I asked why she herself had traveled so far, and whether she thought the APA President might cross the pond to be at a corresponding RCPsych event. I never got an answer to that one.

The most fun moment on Saturday was announced by a text alert to all attendees: “Protesters are outside facing the South building. Use the Exhibition Level Tunnel or the Level 2 Sky Bridge to move between buildings.” I figured those protesters were probably my CCHR friends, so I went out to watch, along with a few score psychs brave enough to ignore the warning. 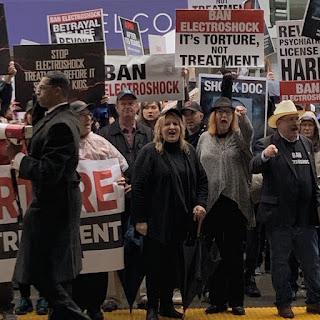 Lo and behold, it was indeed the expected CCHR demo. There were hundreds of fearsome Scientologists with hundreds of insulting signs and megaphones in the street. And they were very well organized. The chant was: TIME. TO. STOP! ELEC. TRO, SHOCK! This continued for a space of some minutes in the pouring rain. Then all of a sudden, the entire mass of demonstrators rapidly advanced in military unison across the street, directly at the “defending” rabble of psychs outside their convention. It looked like a William Wallace charge of the Scots army! Very dramatic, pure fun. They stopped in the nick of time with only a few feet to spare, pointed fingers, and altered the chant to: WE’RE. TALKING. TO. YOU! I’d guess that for at least some seconds, the people on the “defending” side wondered whether they’d made a mistake by being there.