Some frickin' idiot on F Unit recently tried to talk one of the slaves there into compliance by telling him I took drugs once when I had brain surgery, therefore he shouldn't listen to me. A couple of things about this are interesting.

First... the fact that some low-level, support or pseudo-clinical staff, whose name I've never heard and don't even care to know, would bother to read a blog article that I wrote years ago, and go to the trouble to so crudely misinterpret that article in a way he thought might help control one of the slaves... must be quite a complement to my own intellectual or philosophical influence and authority inside EMHC, one of the most renowned psychiatric institutions in the country!

Second... the particular article was one of the most personal I ever wrote. It revealed my feelings and thoughts in a most vulnerable moment. With that article, I kind of opened myself up to people who consider me their enemy. I probably sacrificed my own HIPAA privacy right (although that is merely comedic). It is just very slightly unnerving, to hear that someone could read about surgeons breaking open my skull and scooping a bloody mass out of my brain while my family sat in a hospital waiting room wondering if I'd ever be the same, and then use that information to attempt to interfere in my relationship with a client.

Third... after rereading the article from January 14, 2018, I think it's pretty good, maybe even important, and I recommend it to everyone! It details my own subjective experience, which demonstrated to me the stark difference between competent (even miraculous) modern medicine and psychiatry. Good medicine helps people, even saves lives. Sometimes a patient has to be talked into it, like I had to be. Psychiatry never helps, it only insults and debilitates. People only accept it under duress or as a result of fraud.

My brain surgery five years ago was good medicine, it helped me, and the people who did it were brilliant and kind. There's no chance that B'Rock, the F Unit slave, will remember the staff who told him not to listen to me as helpful. He'll remember them as incompetent idiots. He'll probably get them fired, or at least nuisance transferred.

I'm not afraid of drugs, giving orders, taking orders, receiving force, administering force to others... but I know what help is and what it isn't. People who need to pretend that brutal, cynical, arrogant, lying control is medical help, or any other kind of help, are cowards.

Psychiatry then and now (same-same) 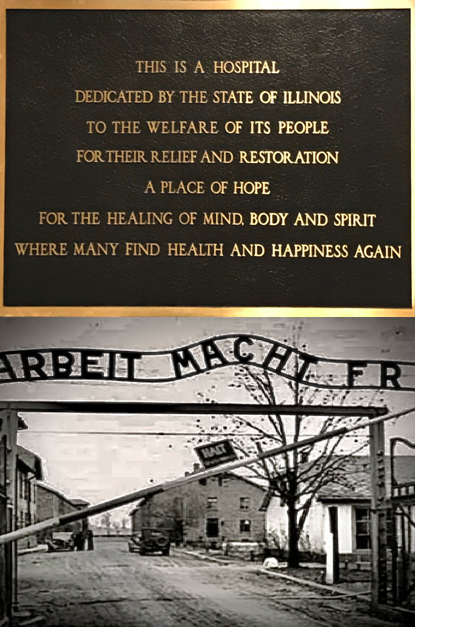 (These are ugly, historically related lies.)
Posted by SRK at 10:58 AM 1 comment:

Testimony under oath, in open court, has to be true. So does a written report that is considered as evidence in any legal proceeding. If testimony or documents are untrue, that can be perjury, which can be prosecuted. At the very least, perjury discredits the perjurer.

This makes psychiatrists cowardly: they are being paid for something they know in their hearts they cannot do or deliver, and they are afraid that people might find out and stop paying them. So they have to lie more and more every day, they have to steal, and hide.

Syed Hussain recently testified in court that one of his patients is "not willing to take a paternity test..." (That's a quote from a transcript, by the way: page 15, line 6.) But that patient repeatedly asked to take the paternity test in question, as his social worker and his psychologist both confirmed in the presence of Hussain himself, who never bothered to contradict them. So the psychiatrist lied. He perjured himself.

Qura Khan recently wrote in a progress note, admissible as evidence, that one of her patients "...has factual knowledge of fitness material but does not have rational understanding due to psychiatric illness and refusing to take psychotropic medication." The only possible significance of that opinion is, the patient remains unfit to stand trial and can't get out. Yet, on the same day Khan wrote another note about the patient's "...fabricated statements (he reported that he was told by this writer that he will not get out of here until he takes meds)...". This second note was hand written by the lying psychiatrist! Again, perjury.

These people tend to complain that I am confrontational and hostile toward them, or that I threaten them, or that I presume to question their psychiatric "diagnoses" despite the holy and omnipotent authority of the Almighty DSM5.

They are correct on all accounts, but to no avail. I do confront them, I do call them liars, and I will sue them when they commit torts against people whom I represent, or if they violate the law.

I certainly insist that their so-called "diagnoses" and their Almighty DSM5 are utter nonsense.

But I can honestly help them. And I don't have to pretend I'm a doctor.