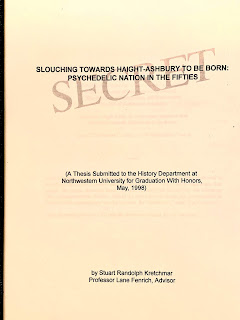 ...the center cannot hold;
Mere anarchy is loosed upon the world,
The blood-dimmed tide is loosed, and everywhere
The ceremony of innocence is drowned;
The best lack all conviction, and the worst
Are filled with passionate intensity.

And what rough beast, its hour come round at last,
Slouches towards Bethlehem to be born?

A lot of writers, forced to contemplate the noisy confusion that has since coalesced in the phrase the sixties, turned to these evocative lines... For a lot of Americans, that image, the rough, slouching beast, captured perfectly the unease they felt when they contemplated their children. Indeed the only editorial change the poem needed to be completely contemporary was the location: for “Bethlehem,” read “San Francisco”.

(From Storming Heaven: LSD and the American Dream, by Jay Stevens(1))

Only a few months after illusions of an American Camelot were dashed by the bullets of a Dallas assassin, a remarkable young orator named Mario Savio told fellow children of the sixties that they were not raw materials to be made into products for sale to clients of the University of California at Berkeley. He urged them to resist that suppression of individuality and creativity which was apparently required for membership in the American economic system, and to “die rather than be standardized, replaceable and irrelevant.”

Within three years of Savio’s speech from the top of a police car, a revolution was consuming America’s youth, who ostentatiously proclaimed they were “alive again in the middle of this monstrous funeral parlor of western civilization.”(3) The adult establishment began to fear that society would indeed be prevented from working at all, as the new generation asserted in ever more bizarre ways that it had “escaped from a culture where the machine is god.”(4) The best authorities in social science had predicted that baby boomers would be loved by American corporate leaders because they would be so easy to control, but all of a sudden many were ready to turn on, tune in and drop out. What happened? Did the Ozzie and Harriet world of the fifties really evolve as quickly as it seemed, without logical transition, into a decade of turmoil and psychedelic counterculture?

Images of Haight-Ashbury hippies and the 1967 San Francisco Summer of Love are an outstanding representation of the history recalled under the rubric of “the sixties.” The cultural glue which briefly held the little corner of the country in that picture together was the “dynamite”(5) mind drug, d-lysergic acid diethylamide. By early 1965 LSD use was endemic in the Haight. But as late as September of that year a headline in the San Francisco Chronicle suggested there was little public awareness of anything new happening in the obscure old neighborhood which reportedly had become “A New Haven For Beatniks.”(6) Ken Kesey had already crossed the country in a psychedelic bus with his Merry Pranksters and turned the Hell’s Angels into acid heads, and Timothy Leary’s International Foundation for Internal Freedom was well established. But even by the following spring of 1966, when a U.S. Seanate subcommittee held hearings on LSD, the subject was discussed as a new manifestation of the old fifties bugaboo, “juvenile delinquency.” Things changed so quickly that by the time of the media heyday over hippies and the Haight, by the time network news anchors recognised a widespread “drug problem,” the energy of the real psychedelic culture was in fact already spent.

1. Stevens, Jay. Storming Heaven: LSD and the American Dream. New York: Harper and Rowe, 1987. Page x.
2. Savio, Mario. Quoted in Bloom, Alexander, and Wini Breines, Takin’ it to the streets: A Sixties Reader. New York, Oxford University Press, 1995. Pages 111-115.
3. Sinclair, John. “Rock and Roll Is a Weapon of Cultural Revolution” -article reprinted in Bloom and Breines, pages 301-303.
4. Strait, Guy. “What is a Hippie?” -essay reprinted in Bloom and Breines, pages 310-312.
5. Although caracatures of tripped-out hippies crooning “dyn-o-MYTE” to the music of Jefferson Airplane or the Grateful Dead probably come to mind first, this simile was first coined in reference to LSD by none other than Richard Helms of the CIA, in late1953. Helms was the prime instigator of the CIA’s LSD research programs in the fifties. See, Lee, Martin A. and Bruce Shlain, Acid Dreams, The Complete Social History of LSD: the CIA, the Sixties and Beyond. New York: Grove Weidenfeld, 1985.
6. September 6. This was the headline, though the text of the article did use the word “hippies” to describe the local neighborhood people. Perry, Charles. The Haight-Ashbury, A History. New York: Vintage Books, 1985; page 19.